Home Sport Today Football Neville: Man Utd can turn it around | MLS one of toughest...

Inter Miami head coach Phil Neville believes his former side Manchester United can still salvage a successful season after being impressed by the togetherness the squad has shown in recent weeks.

The Red Devils have built up momentum with recent wins against Leeds and Brighton in the Premier League but will have to manoeuvre a tricky March fixture list, with Manchester City, Tottenham and Liverpool all coming up.

Neville believes the criticism the squad has faced in recent months has brought the squad together.

“I read the other day about how many points United have amassed since [Ralf Rangnick] arrived… when you think of the amount of attention United get, I think the results have probably gone unnoticed,” Neville told Sky Sports News.

“They’re building a lot of confidence and building on a lot of good results, I watched the game against Leeds and I thought they played fantastically.

“They’ve been getting a lot of criticism, as individuals and collectively, but it looks like it’s bonded them together and that was always going to be the test.

“There was a lot of noise coming out of Old Trafford but it looks like it’s brought them together. Regardless of what country you’re in, the most together teams are the ones that are the most successful.

“It looks to me they’re building a lot of confidence and they still have a chance of winning the Champions League and being successful in the Premier League.”

‘Beckham wants success and I have to deliver it’ 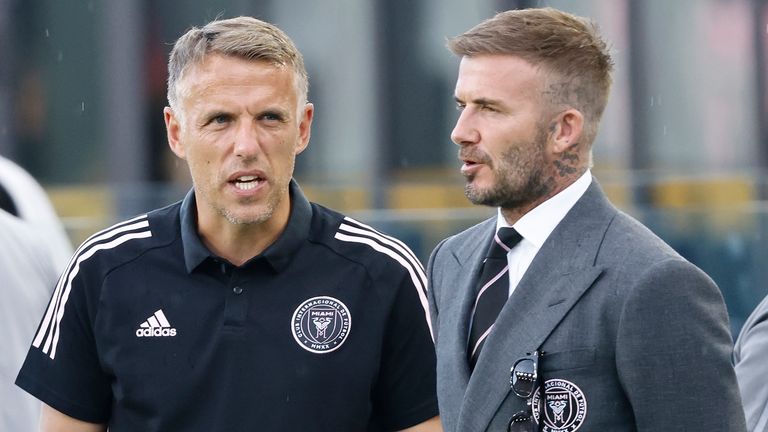 Inter Miami head coach Phil Neville says despite their close friendship, his relationship with club owner David Beckham is ‘professional’ when it comes to football matters.

In Miami, Neville works closely with his good friend and co-owner of the club, David Beckham.

The two share a special bond forged at Manchester United but despite being as close as they are, Neville is aware that friendship is no replacement for results.

When asked how he manages his relationship on and off the field with Beckham, Neville explained: “It’s professional, it has to be professional. Our relationship won’t change because of a bad result or success or failure.

“We are close friends, we always have been and always will be but I’ve known David for a long, long time and the management group brought me in to bring success to this club.

“If that success comes, which I’m really confident it will be, that’ll be good but if it doesn’t, he’ll want to be successful whether I’m the manager or not.

“There’s professional respect for each other and at times last year, we weren’t playing well…he was a great support for me and that’s all you can ask for as a manager.

“People kept talking to me about the minuses about having a friend as an owner but for me it’s been one big plus so far and I’m sure it will continue to be that way.”

Miami finished outside the play-off places in 11th in the MLS’ Eastern Conference last season, but looking forward to this campaign Neville has a brand new team to mould into his own.

With 19 players leaving this summer and 13 coming in including the likes of former Premier League full-backs Kieran Gibbs and DeAndre Yedlin joining up this summer, Neville’s main aim is to improve on last season’s finish.

“The results last season were nowhere near as good as what I wanted. The challenge of being successful in this league is as good as any challenge in my coaching career,” Neville explained.

“It’s one of the toughest leagues in the world to play in, to coach in and to be successful in and that’s the beauty of this league.

“The challenge this year is to have a better second season and with the ownership we’ve got, we want to be successful and I want to be the coach that brings success to this franchise.”

Neville took charge of the MLS side in January 2021, which proved challenging as it meant he has not been able to travel to England to see his family due to the pandemic. However it has given him the chance to fully embrace life in America.

“My family and I have settled in really well. My daughter is in school, my son is at the football club and my wife is happy here which makes a real big difference,” Neville said.

“The plan at the start was for me to come on my own and that scared the living daylights out of me.

“I miss my mum and my sister as well, I’ve seen my mum for five days in the last year and a half but we hope now we’re coming out of the pandemic we can start sharing our life out here with our family.

“I’ve immersed myself in life out here, one thing we said if we wanted to be really successful here was that we had to commit fully and I have and so have my family.

“One day I will come back to England but hopefully not for the foreseeable future. MLS is one of the toughest and best leagues in the world and I want to be here for a long time.”