Jurgen Klopp insists Liverpool’s focus remains solely on winning games and not chasing down the Premier League leaders after cutting the gap to Manchester City to three points.

Liverpool took full advantage of their game in hand, thrashing Leeds United 6-0 to close the gap at the top of the table and overtake the champions’ goal difference tally.

The Reds – who head into Sunday’s Carabao Cup final against Chelsea in buoyant mood – sit three points off City having played the same number of games as Pep Guardiola’s side, but Klopp refused to be drawn into title-race talk.

“We don’t chase City, we try to win our football games,” he said. “Obviously we have our cup final at the weekend, City play before and they might win, so it [the lead] could be six points again before we next play.

“I’m not sure whether we play before or after them in the game after, so it might be nine points all of a sudden. We don’t have to count these kind of things, we just have to win our football games. 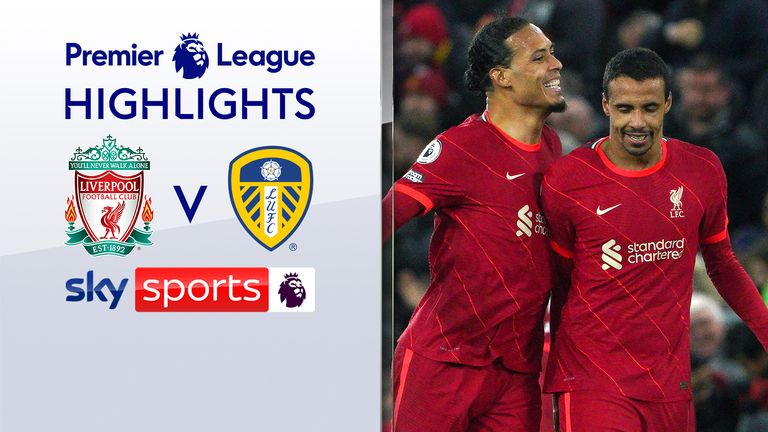 FREE TO WATCH: Highlights of Liverpool’s win against Leeds in the Premier League.

Mohamed Salah scored two first-half penalties either side of Joel Matip’s superb strike, before a late Sadio Mane double and Virgil van Dijk’s stoppage-time header put the seal on an imperious display of Liverpool’s attacking might.

Despite registering their biggest home win since September 2007, Klopp was more impressed with the defensive showing from his Liverpool players, which he hailed as the difference between success and failure for his talented squad.

“As much as I love the goals we scored tonight, I loved the clean sheet, because everything we do is based on a top, organised defensive performance,” Klopp added.

“Without that, we are just a good football team. With it, we can be a successful football team. I liked the determination we showed tonight for defending, the commitment from the boys.

“This is an interesting period of the season, definitely. We’ve got the final, then the FA Cup, and then West Ham, we already lost against them this season so no-one should count the points before we play them. We just have to stay really focused and go with it with all we have.”

Klopp’s celebration in front of the Kop at the end – firing out eight fist pumps instead of his usual three – hinted at how significant he felt the result and performance was.

“I’m not sure had it been 10 seconds later I wouldn’t have done it but in that moment, I got carried away,” he explained.

“I really love how the whole stadium responded tonight to the game and how we were able to win the game as a unit and I couldn’t be more thankful for the support of the people.

“I am really happy that from time to time – it will not happen a lot – we can give them a performance and scoreline like tonight.”