On February 24, 2008, Tottenham lifted the League Cup to end their nine-year trophy drought.

It was the moment that was supposed to herald a new era of success for the club under head coach Juande Ramos.

But it proved to be a false dawn, as that Carling Cup victory over Chelsea remains the club’s last piece of silverware.

Fourteen years on, Sky Sports exclusively talks to the man who lifted the cup that day, Ledley King, to remember the win and his “hurt” at the club failing to win anything since.

It is a special night for the kids involved with the Premier League Kicks session in Tottenham. A surprise appearance from Spurs legend Ledley King, to celebrate 15 years of the flagship community programme, brings some much-needed warmth to a blisteringly cold evening at the Ferry Lane Cruyff Court, an artificial pitch in north London.

But, as the children receive coaching and advice from King, it is apparent that, in the week that marks 14 years since Spurs last won a trophy, many of the young participants were not even born when he lifted the League Cup as captain in 2008.

“I can’t believe it’s been 14 years,” King exclusively tells Sky Sports at the event, which aims to support young people in regular and fun activity that creates more inclusive communities.

“That League Cup win was definitely the highlight of my career. I played in my first final when I was 21 years old [2002 League Cup final defeat against Blackburn] and at the time you think that the next opportunity is going to come around a lot quicker than it did.

“So for the 2008 final, I was determined not to let this one go past, because I never knew if it was going to be my last.”

It did indeed prove to be King’s only major honour in his 13 years at Spurs, as the 2-1 extra-time win over Chelsea saw the one-club man achieve his childhood dream.

“I’d seen many great captains lift trophies before me,” he says, “and it really is a thing when players dream of lifting the trophy at Wembley as kids.

“It’s something that’s real, and to be able to do that was a dream come true.”

Looking back at Tottenham’s side that day, it is fair to say they have had better since. So what made King’s team a trophy-winning one?

“I think it had players that had been together a little while,” he says. “It was a good core of players used to playing together and they were hungry.

“It was a group of players that hadn’t really won much in their careers. Robbie Keane, Jermaine Jenas, Aaron Lennon, Paul Robinson and Jonathan Woodgate were all players of a good age and they were just so hungry to get over the line and win that trophy.

“I think that really was the difference for us on the day.”

That hunger had certainly been needed in Spurs’ run to the final. A 2-0 quarter-final win at Manchester City was followed up by a famous 6-2 semi-final aggregate victory over north London rivals Arsenal.

But the final against Chelsea – who were the defending champions, had won two of the last three Premier League titles, and had a team featuring the likes of Frank Lampard, John Terry and Didier Drogba – was always going to be their toughest test.

The first half proved it. In the 39th minute, Drogba scored a stunning 25-yard dipping free-kick that wrong-footed Spurs goalkeeper Robinson to give Chelsea the lead.

Tottenham needed “courage and determination”, says King, to fight back – and a little bit of luck.

A handball from Wayne Bridge in the 70th minute saw Spurs awarded a penalty. The ice-cool Dimitar Berbatov rolled it past Chelsea goalkeeper Petr Cech to equalise. His celebrations though were anything but calm, as he thumped the returning ball back into the net showing a passion that belied his languid style.

“His penalty really lifted us actually,” King recalls. “Berba was such a cool player but when he actually struck the penalty in he let out a cry of emotion to the fans.

“I think that lifted everyone in the stadium and the players, and we really went on to believe we could win the game.”

Berbatov’s ecstasy carried Spurs into extra-time, and four minutes in Jonathan Woodgate – making just his fifth appearance for the club after joining from Middlesbrough in January – became the unlikely hero.

For such a monumental goal, there was no beauty to it.

Asked whether he laughs when he watches Woodgate’s winner back, he smiles: “We don’t joke about it! We still lift him up in the air when we see him, that’s how much it means to us!

“It was a great ball and Woody got his head in the way and obviously got lucky.” 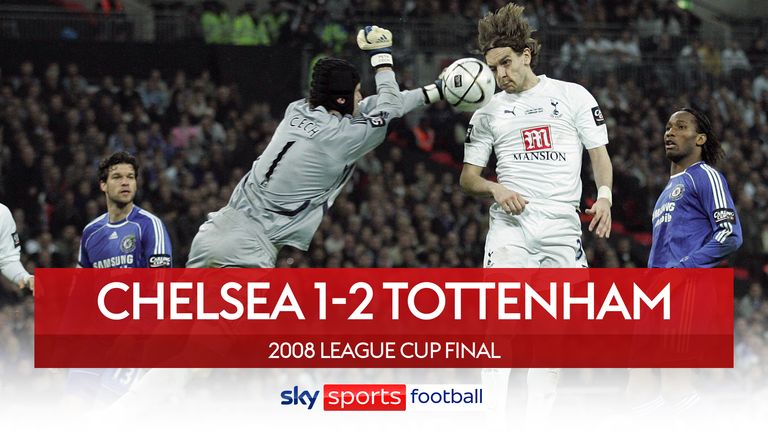 Relive the classic 2008 League Cup Final between Chelsea and Tottenham, where Jonathan Woodgate scored the winner in extra-time

But there was nothing fortunate about Woodgate and King’s performance at the back for Spurs. The pair were colossal in repelling Chelsea’s attacks.

King’s 120-minute display was made even more impressive considering his injury record and the fact he had only completed 90 minutes four times prior to the final that season.

He laughs: “The last thing I wanted was extra-time! I’d not played since the semi-final, so I hadn’t played for a month or so! That was the last thing on my list!

“It was needless to say I was struggling in extra-time and I suppose Woody was not in the best physical shape either, but we managed to get through it.

“I even struggled to get up the stairs to lift the trophy, but nothing was going to stop me!”

Amid the jubilant celebrations at the final whistle, Robbie Keane was in tears.

The Irishman, who had been at the club for nearly six years, had deputised for King as captain for much of that season. King felt indebted to Keane and chose to share the crowning moment with his good friend, which led to an iconic image of the pair hoisting the trophy aloft at Wembley.

“In the back of my head I said to myself that if we win I’m going to lift it with Robbie,” he reveals, “so it’s nice for me to now see the pictures of the two of us lifting the cup together.”

In the aftermath at Wembley, Spurs head coach Juande Ramos set his sights on more success, declaring he wanted to “repeat” such a “unique experience”.

But that final was as good as it got for the Spaniard. He was sacked just eight months later, with Spurs bottom of the table with just two points from eight games.

Asked why it did not work out for Ramos despite the League Cup win, King responds: “It’s difficult. I think we lost some players in the summer.

“Robbie and Berba moved on [the pair joined Liverpool and Manchester United respectively that summer], and they were a great partnership for us.

“We suffered from the loss of their goals and the impact that they gave the team. We struggled in terms of scoring goals.

“It didn’t work out the way the manager would’ve wanted at the time, but he left his mark on the club in his short space of time.”

Fourteen years on from Ramos’ departure, Spurs have appointed six permanent managers in the hope of breaking their trophyless run, but none have managed to recreate that magical day at Wembley.

Three League Cup final defeats in 2009, 2015 and 2021, a heartbreaking Champions League final defeat to Liverpool in 2019 and a second-place Premier League finish in 2016/17 were all near misses.

It has made for frustrating viewing for King, who retired in July 2012.

“Fourteen years is too long,” he admits. “It’s been tough. They’ve come so close on so many occasions.

“I’m a fan as well, so it hurts me when we lose finals.

“I believe this group of players deserve to win a trophy, they deserve that feeling and to get over the line.

“It’s easier said than done though, as there’s so many good teams in the Premier League, so it’s very tough.”

As King continues his kickabout with the kids, he now believes more than ever that they will soon get to see Spurs lift a trophy for the first time in their lives.

The reason for King’s confidence? The man in charge – Antonio Conte.

“We have one of the best managers in the world and he’s a winner,” he says. “Everywhere he’s been as a player and a manager he’s a winner, so the players have to have the same mentality and hopefully with that we can get over the line.”

Ledley King was speaking to Sky Sports to celebrate the “local legends” of Premier League Kicks, to mark the 15-year anniversary of the community programme which has seen the Premier League invest almost £66m and will help an estimated 80,000 young people this year.